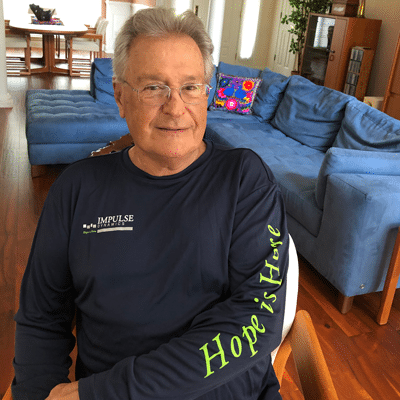 In November 2003, I had a widow-maker heart attack. The lower portion of my heart died. I was given approximately five years to live. My wife and I moved from coastal Georgia to Lake Country in central Georgia in 2005. My wife (Lynn) and I started searching for an experienced cardiologist. We were fortunate to find Dr. Nicolas Chronos in Greensboro, Georgia. He discussed a clinical trial for a heart device that elevates ejection fraction by stimulating calcium uptake to create a stronger heartbeat.

“There is absolutely no question in my mind or my wife’s mind that the Optimizer is why I am still alive today.”

“They had me climb up and down medieval castle steps. Again, “no problem.”

I entered the trial in March 2006; however, I was assigned to the control group and, as a result, did not receive a device. During the study, Dr. Chronos kept us informed about the ongoing effects and the progress of everyone who received an Optimizer implant. I wanted one!

In early 2007, we decided that I would possibly benefit from the Optimizer device. The challenge was where to have it implanted since the FDA had not approved it. Knowing the speed of the federal government, we decided to go it alone. With Dr. Chronos’ approval, I searched the internet and found three European countries were doing implants — we chose Germany. I called the University Hospital of Heidelburg and was informed they were willing to do the implantation. They quoted us a price but never thought I would actually go through with it.

Two weeks later, Lynn and I were on their doorstep. They had informed us that, after the implant, we had to remain in Germany for three weeks for a follow-up visit. Tough instructions to follow — not! The first test of the new device was driving on the Autobahn at 140 mph with my wife driving — no heart attack, although I had white knuckles. The second test had me climb up and down medieval castle steps. Again, no problem — though there was some shortness of breath.

On arrival back in Georgia, I inquired with Impulse Dynamics to determine who would perform clinical monitoring of the device. I was assigned one of the best technical clinicians employed by Impulse Dynamics — Jim Brubaker. With a fast forward to March 2019, Impulse Dynamics announced FDA approval of the Optimizer Smart implantable pulse generator system. Since I had the original version of the Optimizer, I asked Jim about an upgrade. There was a waiting list; however, through magic, Jim arranged the implantation of the latest device in November 2019. We were able to see the heart of Kentucky thoroughbred country for a few days.

I want to express my heartfelt gratitude to God, my wife of thirty-seven years, Dr. Chronos, Jim Brubaker, our daughter Erika, the doctors, nurses, administrative persons, clinicians, and others I have not mentioned by name. Life is our past; death is the future — enjoy the trip. There is absolutely no question in my mind or my wife’s mind that the Optimizer is why I am still alive today.

Find an Optimizer® Smart
Physician Near You